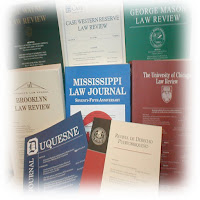 [Note...this is a revision to this post originally made 10-19-09.  At that time I was unaware that I could download a current draft of the law review article by Ryan.  I've now downloaded it and it is available, along with the abstract, below]

Thanks to Sentencing Law and Policy for FYI re: the forthcoming article in the Washington University Law Review--Does the Eighth Amendment Punishments Clause Prohibit Only Punishments That Are Both Cruel and Unusual? by Professor Meghan J. Ryan.  The SLP blog provides a link to the abstract of the article.

Below is the abstract.  Click here for copy of current draft.

Will poking around the Washington University Law Review I located another recent relevant manuscript of interest--Cruel and unequal punishments by Nita Frahany (click to view).  The article discussesimplications of the original Atkins v Virginia decision re: potential interactions/conflicts between the Eight and Fourteen Amendments of the U. S. constitution.

This Article argues that Atkins v. Virginia and its progeny of categorical exemptions to the death penalty create a new and as of yet undiscovered interaction between the Eighth and the Fourteenth Amendments of the U.S. Constitution. When the United States Supreme Court adapted its proportionality analysis from categories of crime to categories of people, it abandoned intrajurisdictional analysis, a de facto equality consideration under the Cruel and Unusual Punishments Clause. The Court, the legal academy, and commentators have failed to consider the remarkable equal protection implications of this doctrinal shift. To see the point in practice, one need only consider two criminal defendants: the first was mentally retarded from birth; the second suffered a traumatic brain injury at the age of twenty-two; and both have identical cognitive, behavioral, and adaptive impairments. Under state statutes cited approvingly in Atkins and others enacted since, the first defendant cannot be executed, but the second one can. This seems wrong on its face, but to understand why, it is necessary to explore the interaction of the Eighth and Fourteenth Amendments. The doctrinal shift in Atkins has profoundly altered that interaction, putting the Cruel and Unusual Punishments Clause in tension with the Equal Protection Clause. This Article illustrates that conflict, and how legislative classifications adopted pursuant to categorical exemptions under the Eighth Amendment may now be subject to Fourteenth Amendment scrutiny.