This study was previously posted, with comments, at my ICDP blog, where a link is provided to an annotated copy of the article.
http://www.atkinsmrdeathpenalty.com/2013/09/iq-score-differences-across-time-may.html
New evidence confirms link between IQ and brain cortex
http://www.psypost.org/2014/03/new-evidence-confirms-link-between-iq-and-brain-cortex-23406

Here is today's transcript for the oral arguements and questioning before the US Supreme Court (SCOTUS) re the Hall v Florida Atkins case. To someone who has worked his entire career in intelligence testing, it is very interesting to hear the justices talk about IQ, SEM, etc.

Amicus briefs from APA and AAIDD (and others) have been posted previously at this blog. Prior decisions regarding Hall v Florida are available in the blogroll under Atkins decisions

Posted with Blogsy
Posted by Kevin McGrew at 6:40 PM

Shared from News on Flipboard. Download Flipboard for free here. 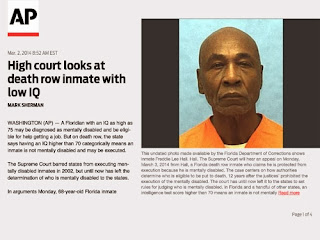 Article: A Systematic Review of People with Autism Spectrum Disorder and the Criminal Justice System.

A Systematic Review of People with Autism Spectrum Disorder and the Criminal Justice System.
http://www.ncbi.nlm.nih.gov/pubmed/24577785?dopt=Abstract

Sent via Flipboard
*
Posted by Kevin McGrew at 10:05 AM