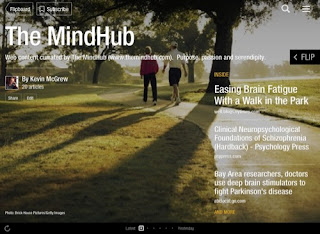 The MindHub Flipboard Magazine.  All you need is the free Flipboard app (iPad, iPhone, Android phones, Nook and Kindle - http://flipboard.com/) and you can stay up-to-date on Web content curated by the MindHub.  You can also suck other content into this one stop app for all your news and content (USA Today; news headlines; magazines; FB; LinkedIN; Endgaget; etc.).  I use it to browse everything I am interested in every day, from around the world, as I drink my AM Java.  I love this FREE app.

Federal sentencing is in disarray with a raging debate pitting Congress, the United States Sentencing Commission, and the federal judiciary against each other. Ever since the Supreme Court rendered the federal guidelines as merely advisory in United States v. Booker, the rate of variances from guidelines' recommendations has increased. After the Supreme Court in Kimbrough v. United States ruled that a sentencing judge could reject the crack cocaine guideline for a policy dispute with a Commission guideline, the variance rate has risen further still. While Booker/Kimbrough permits the judiciary some discretionary authority, it is threatening to the Commission and the legitimacy of its guidelines.

The downward variance rate is at its most extreme with a very controversial crime: child pornography offending. The courts are in disagreement as to whether, as a matter of law, a sentencing judge has the authority to use a Kimbrough-type categorical rejection of the child pornography guideline. Through a comprehensive review of federal sentencing opinions, common policy objections to the child pornography guideline are identified. The guideline is viewed as not representing empirical study, being influenced by Congressional directives, recommending overly severe sentences, and resulting in both unwarranted similarities and unwarranted disparities. The issue has resulted in a circuit split. This article posits a three-way split with four circuit courts of appeal expressly approving a policy rejection to the child pornography guideline, four circuits explicitly repudiating a policy rejection, and three circuits opting for a more neutral position. A comprehensive review of case law indicates that the circuit split is related to unwarranted disparities in sentencing child pornography offenders nationwide. This assessment was then corroborated by empirical study.

The Sentencing Commission's dataset of fiscal year 2011 child pornography sentences were analyzed to explore what impacts policy rejections and the circuit split may have on actual sentences issued. Bivariate measures showed statistically significant correlations among relevant measures. The average mean sentence in pro-policy rejection circuits, for example, was significantly lower than in anti-policy rejection circuits. A multivariate logistic regression analysis was employed using downward variances as the dependent variable. Results showed that that several circuit differences existed after controlling for other relevant factors, and they were relatively consistent with the direction the circuit split might suggest.

The article concludes that the child pornography guideline suffers from a multitude of substantial flaws and deserves no deference. It also concludes that there are no constitutional impediments to preventing a district judge from categorically rejecting the child pornography guideline. Booker and its progeny stand for the proposition that there are no mandatory guidelines, even if a guideline is the result of Congressional directive.

A new issue of Journal of the American Academy of Psychiatry and the Law Online is available online:
1 March 2013; Vol. 41, No. 1


The below Table of Contents is available online at: http://www.jaapl.org/content/vol41/issue1/index.dtl?etoc

Link to abstract below.

PT J
AU Mossman, D
AF Mossman, Douglas
TI When Forensic Examiners Disagree: Bias, or Just Inaccuracy?
SO PSYCHOLOGY PUBLIC POLICY AND LAW
AB Previous investigators have suggested that bias might account for the
disparate rates at which examiners conclude that defendants are
competent to stand trial (CST). This article describes three computer
studies of how biases and imperfect accuracy might affect rates of
disagreement. Study 1 assumed that examiners could discriminate between
competent and incompetent accurately (effect size = 1.81, receiver
operating characteristic area = 0.90) and used computer simulation of
20,000 pairs of CST evaluations to determine how different judgment
thresholds (e. g., thresholds exemplifying biases toward opinions that
defendants were competent or incompetent) would elevate disagreement
rates above those expected through chance error alone. Studies 2 and 3
evaluated the assumptions of Study 1 using previously published data to
make inferences about examiner accuracy and threshold locations.
Imperfect accuracy alone would often explain much between-examiner
disagreement, even if examiners approached evaluations with distinct
biases. Results from Studies 2 and 3 suggested that assumptions used in
Study 1 were reasonable. Many instances of between-examiner disagreement
might be attributable to imperfect accuracy that expresses itself in
random errors, rather than to examiner biases that imply different
thresholds for judging defendants' competence.
PD FEB
PY 2013
VL 19
IS 1
BP 40
EP 55
ER
Posted by Kevin McGrew at 7:31 AM

Interview of Dr. Flynn on the Flynn Effect can be read here.