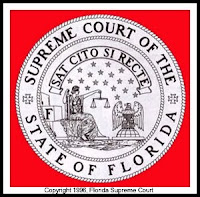 As I stated previously, and what comes through during portions of the hearing, is that a critical problem for the state of Florida is its bright-line rule for MR/ID Dx....a score must be 70 or below...no allowance for considering SEM.  In my opinion, this is the most important issue  at stake in the Dufour hearing, as is evidenced by the frequent reference to the Cherry court or decision (decision that established this scientifically unsupportable criteria in Atkins cases in Florida).

I am interested in the views of experienced viewers of such proceedings regarding their "take-away" impressions of the hearing.  I was particularly impressed with the lawyer representing AAIDD and her valiant and reasonably clear attempt to explain SEM to the court.  At times Justice Barbara P. appeared to be "getting it"....and in my observation, seemed to understand the possibility of the error of the Cherry based bright-line rule.

On the other hand, my belief is that most psychologists who engage in intelligence testing will be a bit shocked at how IQ scores and names of IQ (and other) tests are tossed around as mere commodities....with little discussion of the fact that some measures are better than others.  Of course, this is a very time-constrained hearing and all participants have read hundreds of pages of briefs.....so I need to cut them some slack.  Still....it is bothersome to me, as an intelligence test developer, scholar, and applied psychometrician, how the term IQ is discussed in such simple language...which suggests that the courts are not well educated on the science of intelligence testing...which in turn makes them rely on the expertise of different experts in different cases...experts who vary in depth of knowledge of the science, research, and psychometric underpinnings of psychological assessment instruments.

As I said above, I'd like to hear the comments of others who have viewed the hearing.  I would suggest that this may be a good topic to discuss at the Atkins MR/ID Death Penalty listserv.