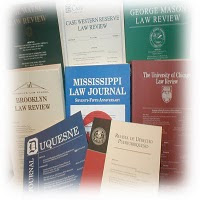 I am not a lawyer, but I find reading law review articles relevant to Atkins cases interesting...and they help me better understand the legal issues and court proceedings.  I found the recent Harvard Law Review note Admitting Doubt:  A New Standard for Scientific Evidence very interesting.  It deals extensively with standards of evidence and expert testimony and a specific focus on the Daubert standard.

As I learn more about Atkins proceedings, I've learned that there is a distinct distinction between legal and scientific standards of evidence and procedures.  As a social scientist who deals with probability-based research and methods, I found the following section particularly illuminating.  My guess is that psychologists who provide expert testimony in Atkins hearings are often frustrated with the different view that legal proceedings take toward evidence and the determination of truth.

Indeed, law and science take a number of different views on the determination of truth. At a structural level, the judicial system typically relies on zealous advocacy — within certain ethical bounds — to reach conclusions, while the scientific community tends to follow an organized skepticism model based on critical peer review.72 At a more detailed level, science and law treat causation differently: