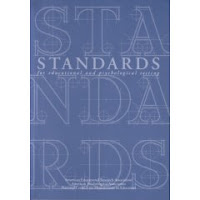 A number of professional standards and codes of ethics need to be understood by professionals developing and using intelligence tests in death penalty cases. Probably the most important, from a measurement and psychometric perspective, are the Standards for Educational and Psychological Testing (often call the "Joint Standards"). These standards are the result of a cooperative joint effort of:

As described at the APA web page:

Revised significantly from the 1985 version, the 1999 Standards for Educational and Psychological Testing has more in-depth background material in each chapter, a greater number of standards, and a significantly expanded glossary and index. The new Standards reflects changes in federal law and measurement trends affecting validity; testing individuals with disabilities or different linguistic backgrounds; and new types of tests as well as new uses of existing tests. The Standards is written for the professional and for the educated layperson and addresses professional and technical issues of test development and use in education, psychology and employment. This book is a vitally important reference for professional test developers, sponsors, publishers, users, policymakers, employers, and students in education and psychology

Over time some of these specific professional standards will be discussed in greater detail, particularly within the context of specific issues and or examples.