There are dueling factor study articles regarding the WISC-V in the research literature. Here is the take of Reynolds and Keith, who, IMHO, tend to do some of the best factor structure research in intelligence testing.

The purpose of this research was to test the consistency in measurement of Wechsler Intelligence Scale for Chil-dren-Fifth Edition (WISC-V; Wechsler, 2014) constructs across the 6 through 16 age span and to understand the constructs measured by the WISC-V. First-order, higher-order, and bifactor confirmatory factor models were used. Results were compared with two recent studies using higher-order and bifactor exploratory factor analysis (Canivez, Watkins, & Dombrowski, 2015; Dombrowski, Canivez, Watkins, & Beaujean, 2015) and two using con-firmatory factor analysis (Canivez, Watkins, & Dombrowski, 2016; Chen, Zhang, Raiford, Zhu, & Weiss, 2015). We found evidence of age-invariance for the constructs measured by the WISC-V. Further, both g and five distinct broad abilities (Verbal Comprehension, Visual Spatial Ability, Fluid Reasoning, Working Memory, and Processing Speed) were needed to explain the covariances among WISC-V subtests, although Fluid Reasoning was nearly equivalent to g. These findings were consistent whether a higher-order or a bifactor hierarchical model was used, but they were somewhat inconsistent with factor analyses from the prior studies. We found a correlation between Fluid Reasoning and Visual Spatial factors beyond a general factor (g) and that Arithmetic was primarily a direct indicator of g. Composite scores from the WISC-V correlated well with their corresponding underlying factors. For those concerned about the fewer numbers of subtests in the Full Scale IQ, the model implied relation between g and the FSIQ was very strong. 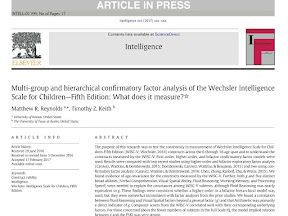 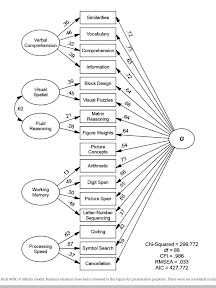 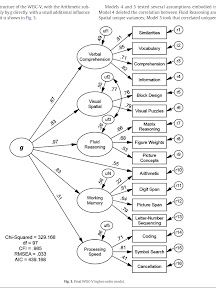