What is the typical relation (correlation) between standardized measures of adaptive behavior (AB)  and measures of intelligence (IQ)?  This is an important question given the role both play in the definition diagnosis of mental retardation (MR) / intellectual disability (ID).
During the late 1970's and 1980's this was an active area of research.  Numerous studies were published that reported correlations between a wide variety of adaptive behavior scales and intelligence tests.  Probably the best synthesis of this research was provided by Harrison (1987).  Harrison's review included a table of over 40+ correlations.  This is Table 2 in the above referenced and linked article.  Harrison concluded, as have most others who have reviewed the literature, that "the majority of correlations fall in the moderate range" (p.39).  When the correlations with maladaptive measures are excluded from Harrison's table, the correlations range from .03 to .91.  This is a wide range.  Harrison could not identify a specific explanation for the variability or range of correlations.  Harrison speculated that variables might impact the magnitude of the correlations were the specific adaptive behavior or measure of intelligence used and differences in sample variability.
Subsequently the Committee on Disability Determination for Mental Retardation published a National Research Council report (Mental Retardation:  Determining Eligibility for Social Security Benefits; Reschly, Meyers & Hartel, 2001) that also addressed the AB/IQ relation. The report concluded that AB/IQ studies report correlations "ranging from 0 (indicating no relationship) to almost +1 (indicating a perfect relationship).  Data also suggest that the relationship between IQ and adaptive behavior varies significantly by age and levels of retardation, being strongest in the severe and moderate ranges and weakest in the mild range.  There is a dearth of data on the relationship of IQ and adaptive behavior functioning at the mild level of retardation" (p. 8).  Factors identified as moderating the AB/IQ correlation were scale content, measurement of competences versus perceptions, sample variability, ceiling and floor problems of the scales, and level of mental retardation.
Given the above, it is hard to render an objective statement on the approximate typical AB/IQ correlation.  With this in mind, an informal research synthesis was completed and is reported here.
First, only the AB/IQ correlations (IQ/maladaptive correlations were excluded) from Harrison's 1987 table were extracted (n = 43 correlations).  Then, the technical manuals for the current editions of the three most frequently used contemporary adaptive behavior scales were reviewed for additional correlations.  This included the Vineland Adaptive Behavior Scale (Sparrow, Cicchetti & Balla, 2005; n = 2 correlations of .12, .20) and the Adaptive Behavior Scales--II (Harrison & Oakland, 2008; n = 10 correlations ranging from .39 to .67; median = .51).
Although six different correlations were reported in the Scales of Independent Behavior-Revised manual (SIB-R; Bruininks, Woodcock, Weatherman & Hill, 1996), the values were not used as they are inflated estimates when compared to the type of correlations typically reported.  For example, very high correlations of .79, .82 and .91 are reported for certain groups.  A close reading of the tables reveals that the SIB-R correlations with either the WJ or WJ-R intelligence test were calculated on the basis of the W-score growth metric.   By definition, a growth metric includes age variance.  If correlations are reported across wide age groups the correlations convey variance related to the correlation between the AB  and IQ constructs but also contains shared variance due to the influence of general age-base development (age).  Thus, the SIB and SIB-R correlations with IQ, although not wrong and providing different information, are not comparable to all other reported correlations where age variance has been removed (typically by correlating age-based standard scores).  Clear evidence for this point comes from McGrew and Bruininks (1990) who used the same SIB/WJ subject data reported in the SIB and SIB-R manuals, but who removed the W-score confounded age variance prior to the calculation of latent factor correlations (via confirmatory factor analysis) between latent practical intelligence (SIB adaptive behavior) and conceptual intelligence (WJ IQ) factors.  The resulting AB/IQ correlations for three different age groups were .38, .56 and .58--far below the values in the .70 to .92 range.  Thus, the values from McGrew and Bruininks (1990) were included for estimates of the SIB/SIB-R IQ correlations in the current synthesis.
Finally, latent AB/IQ correlations (as estimated from confirmatory factor analysis models)  of .27 and .39 were included from Ittenbach, Spiegel, McGrew and Bruininks (1992) and Keith, Fehrmann,Harrison and Pottebaum (1987), respectively.  This process resulted in the addition of 17 AB/IQ correlations to the 43 from Harrison, for a total of 60 correlations.
Descriptive statistics for this collection of 60 AB/IQ correlations are as follows: range of correlations from .12 to .90,  a mean of .51 and a median of .48, and a standard deviation of .20.  Below is a figure that includes a frequency polygon (and smoothed normal curve overlay) and a box-whisker plot of the data set.  A review of the box and whisker plot (at the bottom) shows the median correlation (.48) as a vertical line within the rectangle.  The rectangle includes the 50% middle of the distributions of correlations and shows an approximate range of just below .40 to just above .65.  Of particular note is the shape of the frequency polygon and smoothed normal curve.  The shape of the frequency polygon is consistent with a normal curve.  In quantitative research synthesis this type of normal distribution suggests that total data set included in the review is not biased--both studies that are likely under- or overestimates of the "true" population correlation (due to method or sampling factors) are included.  More importantly, the "bunching" up of the majority of the correlations in the middle provide confidence that the median of this distribution is a reasonable unbiased estimate of the populaiton correaltion.  This type of relatively normal distribution suggests that the current collection of 60 AB/IQ correlations is likely a reasonable approximation of the complete set of population AB/IQ correlations. 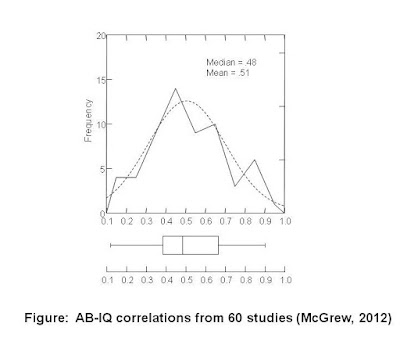 Based on this informal (and admittedly incomplete review of all possible AB/IQ correlation research) one can conclude that a reasonable estimate of the typical AB/IQ correlation is approximately .50 (mean = .51; median = .48), with most ranging from approximately .40 to .65.  This finding is consistent with Harrison's 1987 conclusion of a "moderate" correlation.  The current analysis continues to reinforce Harrison's (and others) conclusions that adaptive behavior and intelligence are statistically related constructs, but  they are still independent.   An average correlation of .50 indicates that AB and IQ share approximately 25 % common variance (approximately 15% to 40 % common variance if one looks at the range of the 50% middle of the distribution of values).  In practical terms this means that for any individual, standard scores from AB and IQ tests will frequently diverge and not always be consistent.
Harrison (1987) provides a nice explanation for the primary reasons for the moderate correlation between AB and IQ.  Her quote is reproduced below

Numerous caveats need to be applied to this analysis and report.  The most important are:

It is hoped that this ad hoc update of Harrison's (1987) review, augmented by quantitive organizational methods, will serve to stimulate a formal meta-analysis by others (hint---a nice study or thesis for someone?)
Posted by Kevin McGrew at 9:24 AM